These jelly baby night lights are made of a tough, rubber-like plastic material. 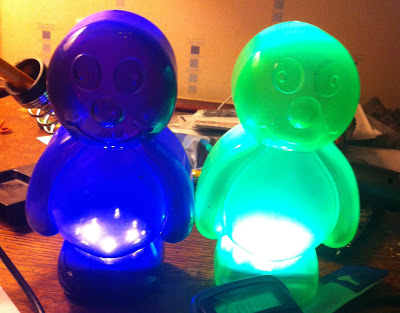 If given to a young child, the night light may end up being used as a toy, i.e. carried/thrown around like a doll or teddy bear. The plastic shell will survive this. Unfortunately, the electronics within it are not so robust, and if the light is used in this way, it will soon lose its glow.

When my wife and I repaired two of these lights, we found two problems had caused the light to stop working. Fortunately both were quite easy to repair, using a soldering iron, solder, glue, a screwdriver and some wire.

The broken parts were:
Here are the electronic parts of the light, once removed from the shell: 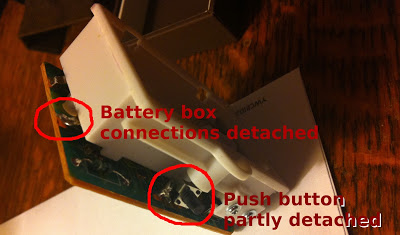 We repaired the connections with short sections (about 2-3cm) of insulated flexible wire. Almost any wire will do for this: it does not have to be thick, as the voltage and current are both very low. The new wires run from the circuit board to the battery box connections, and as they are flexible, they will not be broken if the battery box moves around. Here are the circuit board and the new wires before the joins were made. 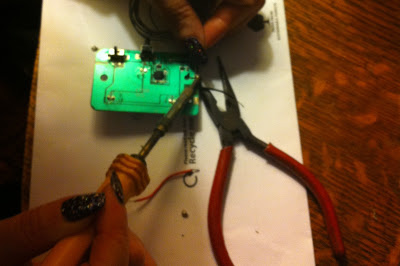 Once the connection is made the light should be tested. Put batteries in the battery box and switch the sliding switch to the "on" position. Having done this, the push button should switch the light on and off: 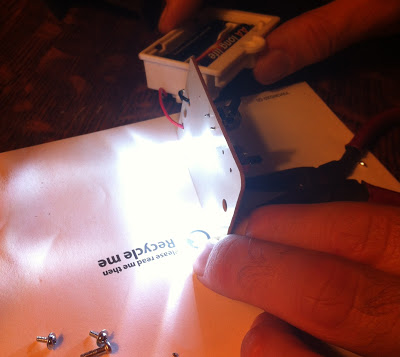 The push button is the second point of failure. It may be partially detached from the circuit board. You may need to reattach it with solder if it is not working, or not working reliably. You may even need to replace it entirely. If I had not been able to get it working again, my plan was to replace it with a tilt switch (which would turn the light on and off when tilted), avoiding the need to actually push the button. But this proved unnecessary as it was easily reattached.

The next step is reattach the battery box to the circuit board. Don't overtighten the screws. 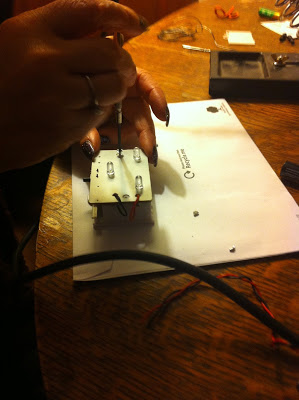 You can protect the push button from future damage by wedging small strips of cardboard behind it. These go between the battery box and the push switch and should prevent it moving. Put as many in place as possible, so that when the button is pressed, there is no stress on the circuit board. Test again.

The final step is to glue the electronics back into the plastic shell. Before gluing, put the circuit board back into the shell and test it. Put the sliding switch in the "on" position before applying glue so that if you accidentally glue the switch mechanism, you have at least glued it in the working state!

The toys go back to their owners in a few days. We will see how long they remain working. I hope that the repairs are actually improvements, because the push button is now more robust, and the connections between the battery box and the circuit board are now flexible. Hopefully the lights will last a long time.
Posted by Jack Whitham at 18:25
Newer Post Older Post Home